As we all know, one of the traits of a statuary is the transmission and the inscription in a future we think of as being unlimited, as unusable as stone. Reality shows that the vagaries of History often decide otherwise. It is indeed stone, sculpted mineral becoming image; it is destruction, conservation and its paradoxes, and iconoclasm that we are dealing with here. That’s why Albert García-Alzórriz’s film moves forth in successive loops, suggesting multiple overlapping. In the opening, at the image’s centre, in front of the camera, a convex mirror like an eye is disposed on a concrete wall, encompassing image where the camera appears at the centre. It is therefore a question of images relating to themselves. Then Prometheus’s myth, punished, nailed on its rock, is called upon in Kafka’s revisited version. A concise apology whose takes sink the film deep into a spiral while two young archivists are working, their bodies almost motionless under the fan’s breeze, their hands kept busy by enigmatic conservation tasks in a warehouse whose shelves are filled with the brightness of statues, understandably unbolted. Images of people in power (an impressive twentieth-century gallery) devoted to eternity are here, undone: their kept fragments are associated to photographs showing those who turned them over, their trophy at their feet. Thus, from the image of stone to stones making images, relations to the body and time, from the statuary’s allegedly imperishable quality to photography’s immediacy, are also re-distributed. Vanities heckled under the camera’s implacable gaze offering plans finely cut by the scalpel, placed in the strictest possible order. While « statues are still dreaming » and a vindictive land unsettles these places and their recurring earthquakes. A film where the rock’s insistent presence still hovers, deemed « inexplicable » according to Kafka’s indications, just before a finale all in malice. (N.F.) 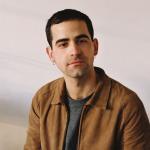