Everything that is forgotten in an instant

The self-portrait of a man torn between two languages and two cities, an essay in comparative town planning, a critical history of United States’ imperialism in South America, a eulogy to emigration, a tribute to a father, a reflection on lines of descent, and so on. How can all this fit into seventy minutes? The answer is with a disorientating tug of war between the mould of the film’s form and the viewer experience. Richard Shpuntoff starts with a perfunctory introduction: born in New York, moved to Buenos Aires in 2012, filmmaker, translator and subtitler. He has a very dim view of his livelihood: “even the best subtitles are crap, because you’re reading instead of watching the images”. In a wonderful paradox, it’s by complicating the viewers’ task that he gives them back their freedom. He allows voice and text to speak alternately in both languages, freeing the subtitles of the obligation to translate what we hear. When the voice-over starts a narrative in Spanish, sometimes the subtitles translate it, but they can also comment, digress, and tell a different story in English. The languages cross paths and switch lanes between the spoken and the written like cars on the urban motorways that rip through Buenos Aires. Shpuntoff says that it’s hard to know if life is a linear or a circular narrative. As for the film, it’s both – enough to make you dizzy when the flow of thought circles round in a multitude of whirlpools. The discrepancies and rapports between image, text and voice vary ad infinitum, their see-sawing turning the viewer into an all-out translator. Exercising one’s intelligence to make connections is, according to French philosopher and translator Barbara Cassin, the property of bilingualism. Todo lo que se olvida in un instante is, then, the first rigorously bilingual film. (C.N.)
Richard Shpuntoff 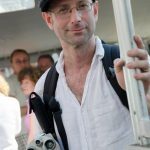