A young woman at the wheel wipes a small tear off her face. She’s on her way to a hamlet nested up in the mountain. In the background, a romantic pop song. It’s winter, the icy wind blows. The spectacle of snowed-in nature then rises in wide, grandiose shots. The land seems hostile. But the film is about the quest for a country. « Domovine » means country; it also means the country we are born in, the village we grow up in, and the place where we feel at home with total disregard for criteria of belonging. For the stakes here are indeed a young woman’s return to her country, a woman who has never set foot on its soil. Absorbed in speechlessness, she takes her melancholia out for a walk along the seasons between the ruins of abandoned houses, in the springtime pastures, crossing the sovereign cows’ path, a herd of ewe, busy truck farmers and affable restorers.
Fragments of landscapes, archival images, songs of resistance and images devoid of memories blend in the absence of a manifest relationship. The film-making endeavour, carried on with remarkable sobriety, turns into a gathering. As in gathering scattered elements to avoid losing them as time flows. Gathering the contrasted image of a country where traces of the past, along with the marks of warfare, are erased. Making its heterogeneous portrait for the foreign eye while leaving it free of its reading, lacking bearings, a tourist in uncharted territory. And finally, gathering in the young woman’s obstinate silence, up to a final oration, a blast vibrating and bursting out, demonstrating all of the art of montage according to Jelena Maksimovic (also montage technician for Stefan Ivancic, FID 2013, Marko Grba Singh FID 2015, Vlado Škafar FID 2016). The film is thus revealed once more in the light of these words spoken by a woman. (C.L.) 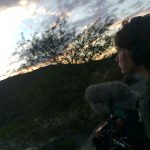