Marta, Luc and Charlotte, aged twenty-five to thirty-years old, have a lot to share in the city of Paris: friendships, demands and refusals. Ideas grow in the occupied university departments. The Episodes (spring 2018) is so singular in its approach to existence and so sovereign in the way it establishes its own language that all attempts at defining, assigning a genre or a previously identified aspect of film, are doomed to failure. All we have to do is open up the dictionary: after all, that was Ponge’s reaction when confronting the unknown. « Episode. A work’s division including several parts, each forming a self-sufficient whole. A more or less striking moment in a lifetime. A set of actions, of events forming a whole and making up a striking moment in history or time. » One’s works, lifetime, and history. Mathilde Girard’s crucial intuition shows it is possible to hold them together, in the same form, to invent the fragmented narration manifesting their solidarity, their enigmatic and common truth. What is existence made of? Of episodes, whether actually lived or dreamed of, converted from speech to stories through which everyone narrates something about one’s self, a gift for oneself and others. What is a season made of? The way the world’s noise resonates within voices and diction whose breath of the present wraps up faces having chosen to hear themselves live and to see themselves talk. What is this film made of? A composition of fragments all of which, through the staging of speech in ways that are never quite the same, provide Marta, Charlotte and Luc with the possibility of embodying their own speech, of exposing themselves in their truth and in their sovereignty of beings shaped by the exercise of the most demanding thinking of what is about to come. Marta tells a friend about her dreams; Charlotte describes her power’s sexual strategies; Charlotte and Marta talk about a poem by Pasolini while Luc offers, in turn, his own self as he avoids it. Episodes go by, and a fourth character takes shape in Mathilde Girard’s own body: beyond listening, its presence turns out to be intimately connected with the presence of others. In the end, we understand, and marvel at, the collection of self-fiction fragments which, for the film-maker, is by far the most elegant way of sketching out her own self-fiction – her autobiography, not everyone’s, written for just a few beings noticed in such strict admiration, loved with precision. (C.N.) 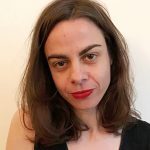