The feline and weary body of a young girl is surrounded by Christian symbols. Crosses, Sulpician images, miniature altars lose their religious meaning to become merely decorative items. Mixed with plastic toys and photographs, they compose secular still lives. A church service is observed surreptitiously through a ground-floor window, like some strange custom, only to be interrupted by the sound of a moped backfiring, inviting the girl to take flight. This religious setting, often filmed in countershot to the beautiful faces of three teenagers, then gives way to wide shots of the luxuriant nature they are bathed in. Their nimble, young bodies find a perfect refuge in the comfortable branches of a mango tree. But at this age, the thirst for thrills cannot be restricted to a familiar setting. The trio hits the road. Without bothering with narrative dross, Heliconia offers a sensual road-trip and gorgeous tableaux vivants that do justice to film as a medium.

The matterist film processing makes the grain of 8 mm dance over the smooth skin of teenagers and that of the heliconia, a tropical plant that blossoms in red garlands, intertwining with film, skin and plant surfaces, into a contemplative framework. It seems to be saying that the real concern of the youth is not some religious quest for meaning, or the discernment of tenderness from desire, but the pursuit of an enchantment of shapes and sounds, ever to be renewed. And that cinema is the quest for some religious vision. But, in the middle of the film, a prosaic documentary sequence scratches the silky texture of Heliconia. It leaves a sudden, deep cut in it, like a reminder of cruelty that defaces the Eden-like picture, like a stab on a painting, and turns its harmonious composition into muted anger. Pushing further their exploration of the country, the young woman and the two young men get lost in the contemplation of a winding ochre desert, whose ideal sand ends up integrating them… until they disappear completely. With them, the image of paradise lost, recognised as such at last, vanishes. Obviously touched by grace, this first film bears the promise of other enchantments to come. (C.L.)
Paula Rodríguez Polanco 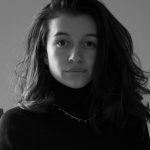