The emergence of a new fiction film director is not a common thing anymore in France, and it hasn’t been in a long time. So, what exactly is a fiction film director? It is someone who has an infectious thirst for designing frames, for shaping lights and colours, someone who enjoys linking sequences, making jump cuts or wiping from one shot to the next. Their films make apparent that cinema is painting expanded by music – through a game of timbres, the modulation of speed and tones, the precision of rhythms. Music: a close-up of a hand on a keyboard, a note, the beginning of a phrase, then the other hand resting on the strings to muffle percussion. Right from the start in Un musée dort, Camille de Chenay half-opens the bonnet of her racing car: the ever-present piano will not simply accompany Ornicar’s adventures. It will throw him into a stream of formal inventions, it will drag and guide the young man in his sleepwalking quest for Chloe, the woman he loves, even though he left her a year before, without further explanation except his sudden need to disappear. Painting: the reproduction on a postcard of Jupiter et Sémélé, Gustave Moreau’s pictorial legacy, will open the way back to the museum of Ornicar’s memory, and to the present life of Claire, who will know how to wake him up. No need to search for clever echoes between the mythological motif of the painting and the story of the film. The connection here is deeper: in a symbolist or surrealist spirit, the pictorial image acts like a talisman, like a magic portal to the other country, that of lucid drifts and waking dreams. While too many young filmmakers capitalise on the nostalgic trend of some fake Nouvelle Vague, Camille de Chenay reconnects freely, without deference or references, with another French modernity, both richer and rarer: a tradition, from Feuillade to Franju to Cocteau, which has learnt from surrealism the liveliness of serial fiction, the childlike spirit of games in a maze, and the flashes of poetic brilliance of an urban fantastic. Ornicar is an avatar of the modern Poet, who is torn between the magnitude of his visionary surges and the short-sightedness of his egocentric originality. Watching Un musée dort is watching French fiction awakening from its cinephile drowsiness and its naturalist laziness. (C.N.) 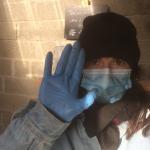