Here it is: Cergy-Pontoise, a town in the Parisian suburbs built in the Seventies, theatre of Régis Sauder’s last opus. If, by evoking the native East of his Retour à Forbach / Back to Forbach (2017), the film questioned townships, the common, communities and their contradictory entanglement it was, however, conjugated in the first person of the singular following an autobiographical technique which a title borrowed from another famous Return had previously announced. Cergy-Pontoise, however, is not Forbach and, like a curious and courteous visitor, Régis Sauder decides to borrow a guide – several guides, actually. Let’s make this clear: Annie Ernaux, a writer whose autobiographical works highlight sociological and political dimensions, lives in Cergy-Pontoise and she states it clearly: « I loved living there ». In addition, her vision of tales of the « self », in line with Baudelairean tradition, conjures up images of crowds: it’s the other people, she writes unequivocally, who give her « her » image: faces, allures, bits of conversation from inhabitants in this town who carry their « confessions » within themselves. The uniqueness of Cergy-Pontoise and its urban history is adjusted to such an exemplary position: a new town whose centre is an ancient village, with its deliberately utopian urban planning (a prefecture building, for instance in the shape of a turned over pyramid), a population of mixed origins, and so forth. So here is a film written according to us, and a film-maker who delegates with the utmost care the film’s direction as it gets lost with such taste for those places often mocked of, re-inventing a writer’s portrait as he succeeds in pointing the diffracted beauty of often concealed destinies. (J-P.R.) 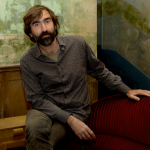 Pierre Creton In the Paris metro, there’s a man in a black mask. An anti-vax demonstration passes by the indifferent camera. The man goes home, the sound of social anger following him inside, but...

Pauline Bastard What is political rhetoric? How is a word embodied? How do we establish a listening ear? These are all questions at the heart of so called politics. And just as decisive, who is...