The opening of Forensickness is set under the auspices of Gombrowicz’s Cosmos: « And I was so good at deciphering still life that, despite myself, I examined, studied, and researched as if there was something to read ». A film about Chris Kennedy’s brilliant Watching the detectives (FID 2018), Forensickness is a detective comedy appropriating for its own purposes the principle of its model: inquiring about the inquirer. Chloé Galibert Laîné lays bare hermeneutic procedures with such brio, playing the game of correspondences and everything included in them. She reveals, with some malice, to what extent the art of hermeneutics is equal to the cinematographic art of montage. This parallel of two unrelated things always results in that effect called revelation. Pursuing her incursion in the world of cinema, she wisely adapts the exposition of her academic toolbox made of citations, archives, borrowings and renewed usage to the aesthetics of a specific cinematographic genre she calls foundfootage. As she moves along, under the aegis of Rancière, she deconstructs Marxist and Freudian « grand hermeneutics » along with their sociological and structuralist avatars of the Sixties. Forensickness is thus a joyful demonstration that everything can be arranged with everything. Up until the final disclosure leaving us in exquisite jubilation and the idea that images, whether appearing on screen or pinned on a wall, are a projection surface before we can even consider them as signifying content. (C. L.)
Chloé Galibert-Laîné 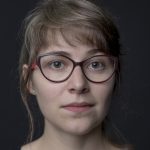