Ein Qiniya, a small Palestinian village in the West Bank, occupied since 1967. This is where Milena Desse is to make her own enquiries: how can one decipher remaining traces and reconstruct History? How can one shine a light, as they say, on such places? Determined to unfold the layers and work out the creases like so many clues about some buried history, the young director strives like an archaeologist, equipped with a magnifying glass and a camera. In a game of up close vs. far-off, launched right from the very first shot, the film becomes a scrutinizing detective in its own right. In turns, it focuses – with close-ups through the magnifying glass – on unearthed remnants, here rusty scraps of metal, there an eroded cartridge case, trying to spot relics of the past, like donkeys, or traces painted on the walls of restored buildings, and to show the frailty of the hidden remains and their stubbornness to bear witness, like in a palimpsest. But the magnifying glass becomes even more revealing, thanks to rays of sunshine, and produces a text. Light, as both a metaphor and a tool, obviously, generates a tale of how this area was like once, filling a white page, word by word, with sentences about what used to give body to this place. Going back and forth, like time itself going backwards at the pace of words filling pages, while we can hear a world of whispers, rustles, crackles, like so many indistinct yet insisting echoes of what is resurfacing. Like the trees in the title, whose bark is like peels that have turned involuntary into parchments, making them the unexpected witnesses of the chaos and pitfalls of History. (N.F.) 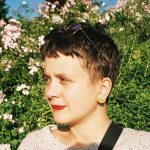