The popsicle melts before our eyes on the tiled floor: two years after Bise (FID 2018), it’s the summer again in another film by Lucie Pannetrat. But this time it isn’t her memories in a studio. It really is the summer, under the scorching sun in the bright light and to the sound of cicadas. Somewhere in Italy, in and around the house where her grandmother lives with her dog. Pannetrat spent a summer here, the time it took to create with them, in painting and cinema, the brightest, lightest tribute to a place and its people who watched her grow up and invent her art from here. It’s a colourful film. Pink, for example – a piece of fabric held up to the sky, a square of light pooled on the floor, a plastic tub in the middle of the yard, the clothes of the artist disguised as Pinocchio, the clouds in the evening light, and splodges on a piece of paper as though the coloured shapes of the clouds had printed themselves onto the canvas. The effrontery of Caravaggio – the wings of Amor Vincit Omnia propped up against the stove as though in a studio – the whimsical imagination of Pasolini, and old love songs sung by the grandmother or crackling from the radio. With these ingredients, Lucie Pannetrat has composed her Italian miniature, placing colours in the shot and then arranging the shots like so many splashes of colour. Each frame is as surprising as an unexpected gift, so as a whole, the film is like Christmas stocking. The undone ribbon writes the title on the carpet. Dolce: no bitterness comes along to complicate the sweetness of these twelve minutes of pure love. (C.N.) 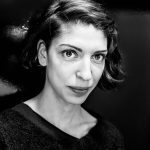