What does it mean to decipher History in the making? Here is the “potentiality” at stake in Dana Berman Duff’s film, developed in two movements. First movement: words, framed in extreme close-up shots, cut out from what appears to be a newspaper page, as can be guessed from the greyish, see-through paper and the black ink of the printed letters. Words read in silence, traces of the rumble of international news. The work of artist Susan Silton, a collection of five front pages of the New York Times published in 1933 and 1934, raises a question: how is it possible to miss the blindingly obvious, how can one unravel what is really going on? Extract from the news, from their thunder and background noise, what is there, waiting to be read – the readable clues, like so many omens. Second movement: how can one testify, bear witness for the witness, as Celan says? When they were prisoners at Theresienstadt concentration camp, now known as a showcase and an instrument of propaganda meant to hide the reality of extermination, musician Viktor Ullmann and librettist Peter Kien, who were later killed in Auschwitz, composed an opera in 1943-44: Der Kaiser von Atlantis. This opera with a terribly lucid subtitle: oder Die Tod-Verweigerung, or Death’s refusal, was not to be performed until 1975. The singing here, from a 1994 version, reaches us from a grey screen, without images, as if hollowed out to be better engulfed in the power of voices coming out of invisible bodies, conjuring up their absence as well as their persistence.
Fragments of almost unreadable sentences, where everything was yet so obvious, connected in their silence to a voice whose source was voluntarily annihilated. And out of this connection rises what refuses to disappear: a latency, a buried power, as shown in the title, borrowed from Hannah Arendt. (N.F.) 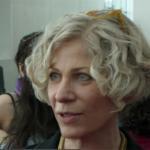 Kharkiv duo Andriy Rachinskiy (b. 1990) and Daniil Revkovskiy (b. 1993) have since 2012 earned international exposure for their multi- disciplinary work at the rich intersection of installation,...

A film-critic/researcher and programmer, Stanislav Bytiutskyi (b. Kyiv 1984) assembles a fictional work with documentary feel. 24 is for much of its length an exercise in encroaching darkness as two...

With Sandrine Kimberlain, Vincent Macaigne, Georgia Scalliet Emmanuel Mouret, the filmmaker of romantic feelings, a theme which is dear to him and that he dissects, breaks down and explores from...

Mantas Kvedaravičius "Do you know what the most incredible thing was, about Mariupol? No one feared death, even if people thought they did. Death was already there, and everyone wanted to die...