Let’s embark upon a journey to discover two collective housing projects. One in Kharkiv, Ukraine, from the early days of the Soviet era in 1930; the other, in the suburbs of Rotterdam, in the 1950s. Their connection? Lotte Stam-Beese, the first woman to train as an architect at the Bauhaus, who took part in both ventures. Two political and social spaces for two different architectural utopias. Wendelien van Oldenborgh (we remember her Beauty and the Right to the Ugly, FID 2015) observes, listens, compares, and juxtaposes the places and their analysis. British artist Hannah Dawn Henderson follows her in her quest and wonders: how did people live there then? How do people live there now? What were the political concerns then? Which spaces were thought for women? For which role in society? The film unfolds stories and expands them with well-informed, militant explanations, as we go back and forth, sometimes imperceptibly, from one city to another, from past to present, in a delicate weaving operation. It could easily become complex, but the director then makes an unexpected move: she repeats the first half of the film, only this time with different sounds, voices, information, and female journeys. In this remake, words and places diffract, the film becomes a palimpsest in which each story sheds light on the other. As a game of transfer and echoes, of viewpoints opening up a counter-History, in reverse, as suggested by the superimpositions the film is peppered with. A journey through the bends of places, History, words, punctuated by the apparitions of an interpreter who translates as much as she comments, in a whispering voice, as a ghostly narrator. (N.F.)
Wendelien Van Oldenborgh 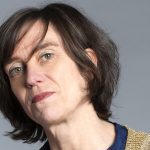