This is Paris Too

Lech Kowalski has gotten us used to movements for a long time now. Movements of the street, of punks, of fetishists, of his mother, of Polish farmers, of strikers: the list is long, it is the almost endless inventory of a demoted humanity. But is it a habit? Definitely not, more like the effect of a camera that remains untamed. And here we are, subjected to its kicks, its tricks, its rebellions, its rages, its heartfelt cries, we are blown away, and it exhilarates our souls. Once again, the idea is simple: to remake An American in Paris. One small point though, this time the American will be a Native American, sporting a baseball cap with the slogan “Native pride” on it; and Paris will be the rough areas along the roads of the capital, busy with homeless people and migrants from all around the world. Do they dance there? Possibly. A boxer at a soup kitchen keeps moving as he talks, as if shadowboxing. And our Native American keeps walking, always putting one sneaker in front of the other, always in a hurry, in a rush to get going, almost running. And Lech’s camera as well, like a mad dog, makes sudden pan shots for no reason, leaves its subject, searches for a wider frame, the sky, the roads. Here, nothing ever stands still, and it comes as quite a surprise when we hear the Native American say that the living conditions of the migrants he crosses paths with are exactly the same as those of his own people, before it almost disappeared, a long time ago. It is probably this freedom to go about through such cruelty that allows the finale – which we won’t spoil here – like an extra movement and a refusal to stay put. It is Kowalski, once again. (J-P.R.) 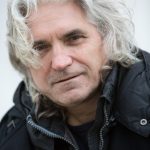