Take an ancient poem, the Bucolics, written by Virgil around 40BC. Of this text divided into ten eclogues, take the 1956 French translation by Paul Valéry. Take Yohei Yamakado, a young Japanese composer and filmmaker, with a passion for the most sober literature and cinema (Ozu, J.-C. Rousseau, Dreyer, les Straub, Oliveira). Add, sparingly, a few friends of this young artist. The refined austerity of the result will not come as a surprise to you. Other than when punctuated by brief sequences arranged with careful deliberation, a black screen is imposed on us all the way through the film, perforated only at the bottom of the frame by the white subtitles, a luminous transcription of the verses of Valéry’s poem. Clearly Yamakado has chosen, and in line with other avant-garde radicals, to make his first feature-length work of cinema the space of a primarily mental projection, freed from the hazards of figuration and relieved of the weight of reproduction. Film is the music of the future, so said another filmmaker. In this instance, it is in fact the music of a faraway past, of an ancient poem attuned to the possibility of a contemporary song, without an erasure of the intervening distance, rather its rendering as an immense, perceptible arch of a palpable desire. (J.-P. R.) 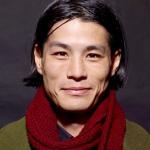