The Notes of Anna Azzori / A Mirror that Travels through Time

To begin with, Anna, was a young woman who used to be a drug addict, and pregnant now. underground film-maker Alberto Grifi and renowned actor Massimo Sarchielli met her in Rome’s Piazza Navona on a January day in 1972: she’s going to be the subject matter of their film Anna. All through the long takes – as video authorized them back then -, they observe her, ask her to do another take, letting her improvise her own life. An overflowing film, a key work from the Seventies, between cinéma vérité and political/theoretical cinema: in it, Anna is an object more than she is their subject. Who was she? Who would she be today? What is it she gives a name to? What will she have been? What Constanze Ruhm undertakes here is exactly such an inquiry. For her, it’s a matter of questioning the film itself as an instrument of the young woman’s oppression; to examine this assigned place of a « Guinea pig » and the object of the film’s « poorly concealed sadism », as Grifi acknowledged it twenty years later. First of all, for Ruhm , the material will be Anna, revisited in terms of its falls, its sounds and images, the off camera bits not kept for the film, the outside in and its unspoken words as she works through them again, mixing, scrutinizing, rehearsing, haunting the film like obsessive ghosts. Such a step aside will surely call for other ones. Thus, those who are summoned include Piazza Navona revisited as the political scene of another history; Daphné d’Ovide and her voice moving across the film as in an ancient choir; and a cast of today’s young women in the guise of potential nymphs. A sequence is gradually built, as in a tight skein, against the place reserved for women, from the Seventies to the present, where archives of feminist struggles are brought to light in their full resonance. A change in point of view, therefore, for Anna’s deep portrait whose voice, at times real, at times nourished with notes the film-maker lends her for the occasion (the “notes” in the title), guides us through a reflection of struggles of its time as well as our own. A way of letting her enter another frame, one that fits her, giving her speech back, and a name. (N.F.)

Film presentation by the director 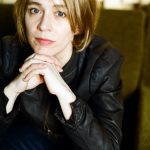 Sara Klingemann To celebrate its 80th anniversary, the Saumery psychiatric clinic is organising a conference on the theme of “traumatic intelligence”. “ While preparing for the party,...