A terrified young woman is staring at a disturbing monstrosity, a kind of Pagan spirit that has sprung out of a river. Such is the opening scene of Pajeú, named after the creature, a fantastic character which follows the meanderings of the river and drives the story. Eager to get rid of a nightmare that is infecting her life, Maristela is looking into the story of Pajeú, the now forgotten figure buried in the depths of the city of Fortaleza. The film goes through successive urban transformations leading to the burying of Pajeú, a mystery imbued with supernatural elements. It constructs a soberly staged paranoid universe. The nightmarish visions, intensified by an electro soundtrack with metallic tones, express the young girl’s angst as she slowly sinks into a depressive state: withdrawal to isolation, feelings of paralysis, death anxiety, melancholia. The border between dream and reality fades. Pajeú cleverly intertwines genres. The amazing feat of the film and its economy of means is that the quest of the young woman, played remarkably, gives us an opportunity to hear the stories of the people of Fortaleza, and also the city’s history, introducing an unexpected documentary element into fiction. Pajeú becomes the echo chamber of generations which are worried about the destruction of their environment, their powerlessness against uncontrollable urban metamorphosis, their environmental concerns and the obliteration of their history. When Maristela grabs the mike in the final solitary karaoke scene, it is to sing in a discordant voice about dispossession… until total disappearance. (C.L.)
Pedro Diogenes

Film presentation by the director 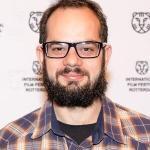 “In 1982 the images of the MASSACRE perpetrated in the Palestinian refugee camps in Lebanon shook the world. Most of the perpetrators were members of the Lebanese Forces, a Christian militia. What...

Ein Qiniya, a small Palestinian village in the West Bank, occupied since 1967. This is where Milena Desse is to make her own enquiries: how can one decipher remaining traces and reconstruct History?...