“Between Popocatépetl and Ixtaccihuatl, one day before the war. Maria, forced to marry a bandit, escapes her fate and runs away into the woods in the company of El Toro. Rosario, in love with an assassinated general, weeps on his tomb dug into the side of a volcano. All of them are destined to wandering and error; all climb, fall and are beset by doubt, all are adrift and lost in the night.” This is how the young Mexican filmmaker Pablo Escoto Luna beautifully sums up his opus that lasts for more than two hours. As we can see, it’s an ambitious project, a blend of epic melodrama, adventure movie and metaphysical meditation. We cannot help but acknowledge the power of this unique vision that guides us deliberately from place to place, scene to scene, each of superbly mastered beauty. But what this film reveals in its long-distance march is that, even more than the interweaving tales, even more than the actors, both stoically acting out the plot’s twists and turns and animated with the greatest jubilation (the magnificent scene where the famous Gabino Rodriguez hurtles down the hill), it is the landscape that stands out as the main protagonist, the mountains, the colours of the vegetation, the radiance of these amazing skies – the landscape, or to put it another way, the country. It’s an Ode to Mexico, and to this light that it’s possible to see and that, above all, makes everything possible, bold enough to revive the tradition of what is known as a great film. (J.-P.R.)
Pablo Escoto Luna 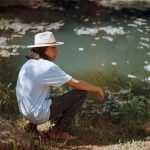