Río Turbio is the name of a mining town located in Argentine Patagonia. Where women are forbidden to go down the wells because of the bad luck they would bring to it. Witchcraft stories whose well-known function is to have women banned: originally from this town, Tatiana Mazú González, wages war against it. An endeavour as accurate as it is determined, under the auspices of Clausewitz’ famous Of War punctuating this film as calculated as a gunshot, much like that photograph representing a woman pointing a gun, gradually printed under our eyes from the very first images. Making an image therefore, leaving stereotypes behind, and giving these women a voice which the (perhaps local) masculine tradition has relegated to a secondary plan. This matricial, inaccessible forbidden mine, though always aimed at, is hardly shown (while we do see rare archival images including men). Silent landscapes of lugubrious beauty unfold in long, still sequences stifled under the snow, in dewdrops, below the ice to be broken. And the women’s voices, their stories about struggles they’ve long since been involved with, are aimed towards the working conditions in the murderous mine. Saying, listening, conveying, as suggested by this radio these women set up, constantly evoked, or that strange recorder disposed on the ground here and there in the film. A step forward taken at the rhythm of a chronicle, like the one told by this film yet to be made, as the film-maker converses with her aunt. The film’s bet, as we understand it, is to outperform what is visible and what is invisible, listening and avoiding, while the mine’s machinery, absent behind the mediation of clinically accurate drawings, is gradually revealed. It’s a question of image regime, of frame and off camera movement, and the possibility of representing this community reduced to the outside, up to the final dedication, against the title’s river of troubled waters. (N.F.)
Tatiana Mazú González 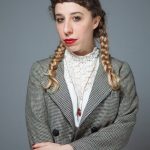