Here we are in Havana, immediately after the death of Fidel Castro and just at the moment when, in what would almost seem a joke, a United States embassy re- opens in Cuba. A time of change, a key moment marking the end of isolationism and the opening up of largely unknown horizons. But instead of deciding between either the composure of documentary or the safety of fiction, Jeissy Trompiz has chosen to alternate for his first film, shifting between fly-on-the-wall shots and slices of ongoing fiction, since, like many famous examples before it, La Imagen del Tiempo tells the story of shooting a film. It gets more complicated due to the fact that the director’s (fictitious?) grandfather filmed there in the 1950s and 60s – fantastic material that’s also shown here: the future film has to bear comparison. Ordinarily, mise en abyme or archive footage is used as a brake, a way of tempering the “enthusiasm”, folding the film up in itself and reducing the speed of cinema, marking the weight of the question marks that hover over the protagonists, of constantly taking stock… Trompiz uses it in completely the opposite way; questions become accelerators, archives set a challenge. Like Vertov, if you will. And reminiscent of Vertov’s work, it’s youth at the helm; it’s the urgency of the film that is the most pressing matter rather than simply making do with a storyline. This is a film that recounts history at the same time as it pre- empts it. (J.P.R.) 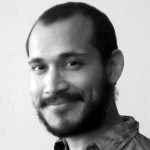