“Catarina is a quantum physics researcher. She studies the sound spaces hidden in the variations of light. By immersing herself in the images she distorts, Catarina discovers a new form of sound spectrum, which seems to give her access to another temporality.” This is how Brazilian director Carlos Segundo shortly sums up a film whose title appropriately means “cracks”, as well as “tears” or “incisions”. This summary, as crystal clear as the serene, limpid, magnificent style of the film itself, hints that it is all about hunting ghosts or, more precisely, about watching out for the things inside the things, imagining the outside inside, etc. In long
still frames, the film makes the assumption that the o -screen is nowhere but on screen, that the intense conversations between the characters are just roundabout ways to create liveable worlds, that the radiant beauty of the settings (a splendid vermilion staircase, a view of the city of Natal, a hall in a museum, a schoolyard), of the people, but also of the frames is an alibi never to interrupt the daydream. Fendas a ords itself the luxury of humour, and mixes it shamelessly with seriousness and elegance, guiding us down a slope where surprises succeed one another – in the gentlest possible way. (J.P.R.) 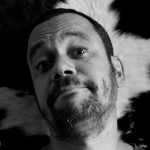