After Hunters since the beginning of time (FID 2008), Carlos Casas confirms his attraction to the edges of the world, and his distaste for contemporary crowds and their bustle. He prefers to film the eye of an elephant, or its skin, with its shades of grey and green matching the bark of the huge rainforest trees, or the gestures of its mahout preparing for the last trip that will take them, along with the audience, to the most secret and fantasized-about place: the elephant graveyard. The secret of his access is simple: he becomes an elephant, and gives the film the same slowness and impassibility. A miracle of slowness: that  of the elephant shaking off the poachers in its pursuit, that of the camera moves watching them die, one by one, in the thickness of a nature that is too big for them. Casas invents the slow-motion adventure film by carrying out a fascinating ecological conversion: nature is not the background of human action any more, but rather a sensitive and thinking entity, whose perceptions and affects cinema tries to convey, through the invention of an original visual and sound matter. The radio announces that an earthquake is laying waste to Asia, killing millions of people? The film, just like the monkey, the trees or the stones, pays no attention to it. Cemetery (FIDLab 2013) deploys its four movements like stages in an initiatory trip towards a non-human, cosmological understanding of space and time. The experience of the end of the world, of the extinction of species, becomes a ride up towards the light, towards a possible rebirth. Finding the elephant cemetery, plunging into darkness, to the limits of perception, means finding back the crib, the whiteness of beginnings. (C.N.) 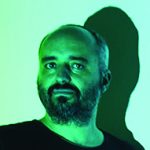