Four years following the release of his first feature-length film, El Complexo del Dinero (Le Complexe de l’argent), Juan Rodrigáñez gathers the same group of actors-artists-performers, this time turning them into circus people. The Indomitable, as this new troupe is called, and The Rights of Man, which is the title of their show (and this film), are both names borrowed from those of the ships in Herman Melville’s last posthumous book, Billy Budd. Unlike the American novel’s dark setting, however, the story here only goes as far as the ambitions the circus wishes to fulfill: making art worthy of the name, an art committed to real social impact. But these buffoons end up spending most of their time arguing about all sorts of topics: the beauty of the landscape, the qualities of vernacular architecture, their own performances, while the show doesn’t quite seem to get off the ground. The film’s success and Juan Rodrigáñez’s uniqueness may be accounted for in terms of an intriguing mix, with the salt of true comedy added, of theoretical quibbles and attempts at circus numbers, of truly valid questions and the vanity of situations. Under a perfectly merry comedy horizon (for instance, how to imitate a bear or a fish along the shore), bitterness keeps growing as it plagues the beauty of the landscape. (J.P.R.) 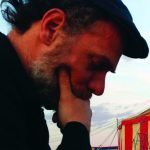 Bas Devos explicitly said about his third feature film: “I want portray a “Brussels woman” like the ones I see in la Cité, in Molenbeek or in the metro. Through the portrait of this woman, I...