For four years, armed with her DV camera, N. filmed the sea along the Corniche Beirut. During this time, T. recorded soundscapes along the shores of seas, oceans and lakes all over the world. These were solitary exercises with no specific future in mind – neither artist planned on making a film. One sea, 10 seas was born later, when N., accompanied by C., decided to return to the images and sounds that, in spite of themselves, had retained something of the circumstances of their recording. But of what, exactly, are these recordings the vestiges, the trace? What was left behind in the picture or the sound, what do we discover in them? The film is written and unfolds in the hiatus between two phases. The first phase, visual and audio, is the moment these traces were captured using technical equipment: the play of light on the water, the sea in all its manifestations, all the “apparitions” or accidents produced by the technical limitations of the DV cam or recorded by the array of mics. The second phase, the phase of description, comment or reverie, is written onto the image itself: bilingual texts printed onto the sea or in the dark, sometimes describing the traces, reiterating what we can see or hear, and sometimes evoking the invisible or inaudible, the emotions, landscapes and dread lodged in the memory itself. Audio, visual, linguistic… it’s rare for a film to proceed in this way, making such strict distinctions between cinema’s three dimensions, and to manage to arrange them into such rich, joyful and unpredictable material. Turning away from her country and history, a far cry from both film diary and structural film, Nour Ouayda finds in the depths of modern aesthetics the materials for a theoretical fantasy in which the memory of the Impressionists’ seascapes and the final glimmers of a sublime Turner seem to colour the dreams of impossible namings and classifications. (C.N.) 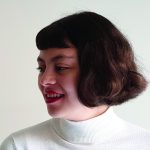