After the babbling of a flock of children in Loubia Hamra (FID2013), after the multilingualism (including a reversed language) of the various troops which appear restless in Le Fort des Fous (FIDLab 2014), all of a sudden Narimane Mari confronts us with early silent cinema. Almost silent actually as the sole male protagonist is moved at the end of his own monotonous chant, a donkey allows himself to bray, and an original score is cheerfully knitted together with the sequences. Nevertheless, and as the title unequivocally points in the direction of the golden age, with the few characters (two women, one man), the great sobriety of their acting, the even greater sobriety of the story, we are clearly immersed in a cinema that claims to be that of the origins, of a time when faces and movements summoned up all possible understanding, and all emotions. “A man digs his own grave and, and as though to keep him from it, the elements and beings quiver.” Such is the – ever so sober – synopsis provided by Narimane Mari. We can assess that the point is to record on the very screen no less than the entirety of lifespans: from the deadly outcome to the movements of birth, the former intertwined with the latter and, it would be no spoiler to say, the whole obviously tied by desire or love. With simple magic, and obvious faith in the power of a cinema without resources: like in Giotto’s work, we are all saved, including viewers. (J.P.R.) 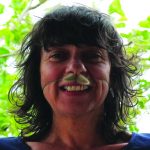