A Cat Dreams About the North

Nine young women and men, including eight from five different countries in Latin America and one from France, are invited to share a week-long theatre residency at the director and his cat Orphée’s home in suburban Paris. As they talk together around the kitchen table, or make exercises in pairs in the living room, days fold and unfold alternating intense work sessions with breaks and quiet interludes. We don’t get to know much about this theatre project, because Un chat rêve du nord strays far from your typical documenting project. What Diogo Oliveira is interested in perceiving and sharing, is the very life of the collective organism that they are experiencing within the walls of his house: the circulation of affects, the variations of intensity, the malleability of connections, the harmony and dissonances in everyone’s rhythms. Also, the rhythms of the music that all the participants have brought with them, the succession of which forms the mobile thread on which the stuff of existence itself is woven. In order to film such elusive matter, the director kind of imitates Orphée: quiet, on the look-out, infinitely supple. The directing alternates on-the-spot images, filmed as closely as possible to bodies, with finely crafted shots in the depths of domestic space. The editing mimics dreams, their freedom and their ability to reverse and turn around things: from the strange to the familiar, from fact to fiction, from what is building up inside, to was is shown to others, on a face. When asked “How can we live together?”, Roland Barthes used to answer with a fantasy: that of a community of “idiorrhythmia”, meaning a form of living together that would respect each individual’s own personal rhythm. In turn, a cat has dreamt about this fantasy, and now, Diogo Oliveira has filmed it. (C.N.) 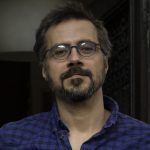