A young woman walks into a cold, anonymous hotel room and starts unpacking. She takes out some clothes and puts them in the closets, together with a few books, that we only see from afar at first, but which are the real reason for her visit. Young Sofia is going to Harvard Library to read the correspondence between her great-grand-mother, Polish poet Zofia Bohdanowiczowa, and poet Józef Wittlinn.
The title MS Slavic 7 is actually the reference code of the bunch of letters. The film traces the exploration of a literary lineage. Sofia Bohdanowicz is played on screen by actress and co-director Deragh Campbell. In frontal compositions based on symmetry, she lingers on every element that may lead to or hinder the emergence of meaning, the construction of the image of her ancestor, known only through the literary and epistolary traces she has left behind. The materiality of letters, at once items to be handled and the focus of inheritance quarrels, matters as much to the director as their content. Thereby Sofia, portrayed by Deragh, spends as much time handling them with care, as she does building a meticulous text analysis, in shots without reverse shots. The person she is speaking to might be the translator of the letters, or maybe someone else who will remain unknown, it doesn’t matter; Bohdanowicz’s real subject is the patient process of shining a light, both literally and intellectually, on a story of which she is the depository, and on how this excavation resonates today. (N.L.) 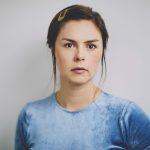