A series of logos and the names of the companies they represent. Some are unknown outside Argentina, and others are multinational corporations established all over the world. And then, the industrial sites that correspond to each of the logos. Behind his windscreen, Jonathan Perel films the factories, the buildings and the entrance gates. It’s the words that give these images their meaning. In his car, Perel reads aloud a report detailing each of these companies’ participation in the assassinations, torture, kidnappings and worker repression that followed directly on the heels of the military junta’s arrival in power.
The language may be judicial, but the act is political: how does one ensure that the reality is heard, the reality of active participation in, or even incitement to state violence beneath the veneer of ‘business as usual’? As in his earlier Toponimia, Perel has only one passion – to exhume the traces that anchor the today’s landscape in the time of repressed history. But this time, he throws himself into the act of filming; the reading is rapid, a fevered race, enraged and in a hurry to say everything before he’s spotted by the security guards – any interruption will add silence to the amnesia. The camera is hidden away in the car, reminding the audience that it’s impossible to openly film these structures that still define an unchanged background. Showing these constraints reconnects with the demands of political cinema, refusing to confine the memory of the vanquished to oblivion. Filming despite everything and speaking out whatever the cost is to arm oneself with one’s own fragility. (N.L.) 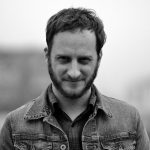