While visiting friends, Frédéric Pajak is captivated by a picture hanging on their wall. The painter is François Aubrun, who has moved to live a few yards from where Cézanne painted the Mont Sainte-Victoire and devoted his life to capturing the trembling light; years later, Pajak finds himself asked to edit a book about the painter, who has since died. Aubrun, l’Absolue Peinture is the cinematic counterpoint to the publishing, a complementary attempt to capture and define a pictorial work by different means.
Because he cannot film the painter at work, Pajak films his world – the members of his family recall his relationship with his work, providing only the most perfunctory bibliographical details, for the essential is in his everyday life. Pictures from his archives show Aubrun himself discussing his relationship with painting, with the landscape he has given himself as a backdrop, and his relationship with the art world. Shots also show the lengthy preparations for an exhibition, selecting the works and trying to arrange them, as well as the meticulous care he takes when publishing.
But above all, it is the place that Pajak films, and with this place, its light, the subject of all François Aubrun’s research. Pajak lingers in the empty halls into which the sunlight pours, on the landscapes whose depth is hard to judge. Filming Aubrun’s painting is impossible and Pajak knows this: it’s the attempt to film the same subject as his painting that constitutes this film’s true ambition. (N.L.) 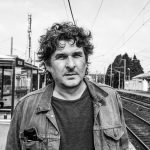