It Wasn’t the Right Mountain, Mohammad

It wasn’t the right mountain, Mohammad: we never get to know who Mohammad is, nor which mountain was the right one. What we do know is what happens on the wrong mountain: the crossing of paths between Mili, who tries to live an honest life by looking after her flock of rams, implacably threatened by an harsh, indifferent world, and Abraham, who is to be told by God at the last moment to sacrifice a ram instead of his own son.
The first instalment of a larger project, It wasn’t the right mountain, Mohammad lays its foundations: to approach the intimate by starting from the Bible, to nourish the relationship to oneself and to the world by going back to the story of Creation. In order to do so, Mili Pecherer uses computer animation to recreate an obviously fake world in which the camera, freed from physical constraints, becomes pure motivity and mobility. While the eye scans a space with ever-reconfigured plastic parameters, the voice reaches out: Mili writes to Mohammad, tells him about her hopes and failures, her fears and pains, and thus opens a perspective that even the most hyperactive of cameras can only glimpse at: that of a soul that is forming itself by revealing itself. (N.L.) 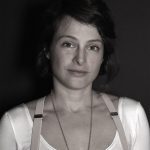