Ficción Privada: the filmmaker wonders about who his parents were, an Indian woman married to an Argentinian man, both running away from the difficulties of their respective countries. The subject is private, to be sure, but is it fiction? Maybe the title is a way for Andrés di Tella to announce right from the start that there is no such thing as final truth, and that any research is bound to be incomplete and biased, based as much on his own memories and on his own vision of his parents as on the truth they experienced. And that ultimately, it will be up to his imagination, in its various forms, to fill in the blanks of the past.
Di Tella avoids the pitfalls by embracing the filiation, and acting as a simple link in the transmission chain between his parents, who died a few years apart, and his daughter, to whom he shows old photos in the opening sequence. The director uses various approaches: old pictures, footage from a film he made about his father after his mother’s passing, fiction stories, or having his parents’ letters read by two young actors, who are a couple in real life and about the same age as his parents when they wrote the letters. The actors read the texts, but also discuss them and venture an interpretation: what can you guess from a correspondence when you don’t know the circumstances ? (N.L.) 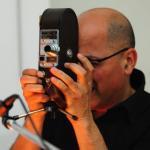