Language, words, images, and their complex mazes are crucial questions for writer and filmmaker Florence Pazzottu. Audiences may have seen Trivial Poème (FID 2017), which combined a political stance with poetic writing, or La Pomme Chinoise (FID 2019), which looked at how the tales we inherit take shape. This film also involves words, which are at the heart of the encounter with Mili Pecherer. Firstly, the words that designate and form us, and those that we mould, as she explains her own names: being named, choosing one’s own name, all the better to get rid of it later depending on life’s upheavals and desires. Stories of migration from one language to another – Hebrew, Russian, French – with the shifts in meaning that slip in, despite us, despite them. With Marseille as a backdrop, an approach to verbs, speech and geographies takes shape. And a life takes shape too, with all that it entails: How glorious it is to be a human being, to borrow the beautiful title of the film by Mili Pecherer (FID2019). Words, then, but also silence or that special moment just before words. And not forgetting gaze… is it possible to “whisper with your eyes”, wonders Mili Pecherer? It’s all here, offered in a transparent mistiness much like the final fable and the last vignette. A question of magic, in tune with the informal tone of a conversation mezzo voce in this film from which Florence Pazzottu tactfully steps aside, leaving us all the grace of this encounter, that’s now suddenly addressed to us. (N.F.) 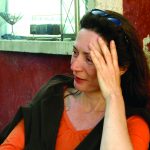