During the winter of 2012, when she was committed against her will to a mental institution in Tehran, Iranian psychoanalyst Mitra Kadiva sent an e-mail to famous psychoanalyst Jacques-Alain Miller asking for help. Thus began a correspondence that ended when she got out. When he discovered this exchange, Jorge León, a director who is concerned about people’s suffering and its silencing (we do remember the deeply moving Before We Go, FID 2014), realised that the subject could be turned into a contemporary drama – into a film. Jorge León opted for an operatic form, choosing to respond to the forced muteness of internment and the silence of an e-mail correspondence with vocalisation, with the elevated expressiveness of singing and music. Yet Mitra isn’t the mere video recording of an opera upon completion; on the contrary, it structures itself as the site of its own making. An opera in pieces, music in progress, singers (including Claron McFadden) rehearsing, composers (Eva Reiter and George van Dam) at work: we are totally immersed into the creation of songs, into the delicacy and tactfulness in each note. But there is more to it, because in this exact and generous production, all the places visited during the shooting are included, especially the psychiatric hospital in Montperrin, near Aix-en- Provence, and some of its patients.Therefore, Jorge León gives its full scope to the production of sounds as well as to the tense, inaudible practice of listening. Listening is described here as caught in the intertwining and sharing of things that are hard to say. As if listening was – at the other end of the imprisonment that is madness – the beginning of music: the beginning of justice. (JPR) 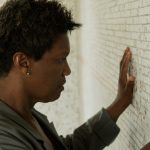