A photograph taken in 1998 in Syria of a cactus field, a plant known for its resilience. War and its havoc have been there. Out of the field, a formerly familiar space for Khaled Abdulwahed, there only remains, or so we hear, this photograph. The point will consist in warding off its loss, replay its memory. That is Khaled Abdulwahed’s attempt, moving from one to the other in Backyard, from slow metamorphosis of the image to its re-enactment, on a smaller scale, of the represented location. A crucial, modest and minor gesture which is echoed here by that of questioning the mechanism at work.
Thus the whole reconstruction process will be developed, down to the smallest detail, gesture after gesture, operation after operation, up to the final touch. A mechanism of destruction and reconstruction in keeping with other mechanisms, that of memory and its substitutes, that of the film and of reproduction, that also, as a dark side, which led to the destruction of the represented place. From a landscape to its representation, zooming, focusing, scanning, developing conjure up helicopters, bulldozers and other tanks which plough the earth. Passing of time and displacements, from Syria to Berlin, from the field to the eloquently dark backyard, at the end of which the meticulous reconstruction takes place, precisely but in miniature, of the place that unravels under our eyes. Yet in the distance, without trying to be deceptive, with the remote rumbling of the city, the sound of steps and other presences, here and now. A Farockian gesture, questioning the image-related technique, its destruction and its memory, from its backyard as it were, as the title suggests. (NF) 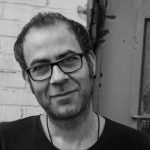