A field: flowers – yellow – insects. A woman’s face appears in close-up, staring at the camera, to the sound of a baroque song celebrating Orpheus, the trees and the stones. With charcoal, the woman draws erotic positions and sexual jousts recalling mythological figures onto the rocks. A voice recites Paul Valéry’s Calypso and his expressions of desire, both complete and frustrated. The decor changes: a seashore and its humble inhabitants: starfish, seaweed, conches, molluscs…
A Dança do Cipreste tells of nothing less than the plenitude of the world. Francisco Queimadela and Mariana Caló, the duo we well remember behind the magnificent The Mesh and The Circle (FID2015) and Sombra Luminosa (FID2018), weave a web of sensual impressions in shots inspired by the most tenuous and vital forms of nature’s song.
The penetrating images latch onto the details of life forms: insects gather pollen from a flower, a hand strokes a coral, a mouth feasts on an urchin. The lighting harmonises with the cycle of natural light: the radiance of the sun and the reflection of the moon on the skin of interlaced bodies. The literary texts and musical compositions sustain the flow of what the montage constructs: a celebration of the vital force, where sexuality connects to the world of fertility, where life multiplies in every possible way. Art appears lustful, Pan-like. All around, life is expressing itself: you just have to open your eyes. (N.L.)
Mariana Caló Francisco Queimadela 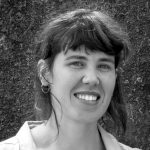 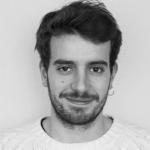