Like Ziffel and Kalle, the German Jewish refugees in Bertolt Brecht’s Refugee Conversations (1940),  from which this project is inspired, Fadi and Rami also live in exile. They are however Syrian-Lebanese and live in 2021 in a European city on the shore of the Mediterranean. When they meet for the first time at the buffet of the ferry terminal, they engage in a conversation without introduction. What follows is a series of unexpected meetings and unforeseen discussions in which everyday life and political considerations, the individual and the general, are approached sometimes with irony mixed with melancholy, and other times with the play of paradox. On the backdrop of the so-called «migration crisis in Europe», Fadi and Rami freely discuss a variety of topics. Their off-the-cuff exchanges often come back tothe cause of their exile: the post-colonial war. Exile, as we know, sharpens the mind. With dialectic and humor, they chat about all kinds of things. Their spoken Arabic, especially their Lebanese dialect from Beirut, is particularly suitable for this, enabling a chiseled language, a whirlwind of words in a closed place, that of transit through strangers and open to all.
Eyal Sivan 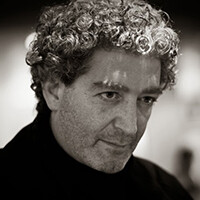 A summer afternoon before a storm. In an 1890’s interior, elderly manor governor warns how faeries come out of the lakes to mingle among people in such a weather. On his way to meet a fellow...

During the street riots against the Pahlavi dynasty in 1978-79, the rebels burned down more than 50 movie theaters in the Iranian capital city, Tehran. After the ideological revolution of 1979,...

Swarm looks at contemporary attempts to use the behavior of honeybees to respond to the conditions of environmental collapse. The film explores the present state of the relationship between humans...

In Spilliaert, filmmaker Lisa Spilliaert inquires into her blood relationship with the renowned Belgian artist Léon Spilliaert (1881-1946). Is she predestined to an artist’s life by this –...

Vera (49) works as a court reporter at the tribunals of Madrid. Her apparently orderly life hides a secret : when she was young, she gave birth to a child of whom she could  not take care. Years...

My uncle gave me his film archives. When I watched them, I realized that he had a comprehensive video diary, that he is a lover of images, and that he recorded everything as if he had been mandated...

Cruz is an actress who has dedicated her career to play different roles for medical students in college. She is a simulated patient who performs emotions and ailments in front of young doctors who...

Mona Island is located a few kilometers away from the mainland, on a small piece of land of a few thousand souls. The island has a strong identity and the spirit of the annual carnival is very...

Jeune Cinéma is a footage film documentary about the famous yet forgotten Hyères Film Festival which took place from 1965 to 1983. It was at that time the most important in France just after the...

A journey of a seed that departs from the archives of the Botanical Garden in Madrid, and ends in an afro-peruvian village in the south coast of Peru, the place where the seed was collected in a...