Here, once again, the subject is work, its body language and unexpected meanings, reminiscent of Lunch Break (FID 2009) where a single tracking shot captures in slow motion the workers’ every mood during their lunch break in the Bath Iron Works shipyard in Maine. Here, in reverse angle, in five still frames over five working days picked out from the film, she lingers over the repetitive procession of the anonymous backs of the workers as they leave the same factory. Turning inside out – and doing away with, the title would seem to suggest – the point of view of the Lumière Brothers’ famous first film, here, time stretches out in the augmented duration of this lacklustre daily routine. (N.F.) 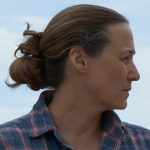 Khalil, Shaun, A Woman Under the Influence is a 16-minute film divided into three parts. The first two sections refer to make-up tests, which are often used in the making of Hollywood films, and the...

Shooted in a middle school gymnasium in suburban Japan, Goshogaoka takes as its ostensible subject the exercise routines and drills of a girls basketball team. The film consists of six ten-minute...

As is often the case with Sharon Lockhart, this film is about experiencing a setting. Here, it involves the courtyards of Łódź in Poland. Once again, the protagonists are children. In six cameos...

Continuing her attentive and precise exploration of workspaces and routines (see Nō and Exit in this programme), the double tide of the title is experienced from the perspective of a clam digger in...

Here, once again, the subject is work, its body language and unexpected meanings, reminiscent of Lunch Break (FID 2009) where a single tracking shot captures in slow motion the workers’ every mood...

Here, the field of observation and investigation is Pine Flat in the rural heartlands of the Sierra Nevada. In a series of twelve scenes - twelve meticulously- composed shots - embellished with an...

From Double Tide or Pine Flat, we know of Sharon Lockhart’s attraction to the subject matter of landscapes approached from various angles. Depicted here in a single stroke is the endless and...

The Teatro Amazonas in Manaus, Brazil, is an opera house built in the late 19th century in the middle of the Amazon rainforest. Using this eccentric colonial project, Sharon Lockhart...