I WAS AT HOME, BUT

Phillip, Astrid’s teenage son and Flo’s brother, comes back home with a badly hurt toe after he run away and spent a week in a forest. Astrid is desperately trying to give a defective bicycle back to his former owner whom she bought it from, an old man who speaks through an electrolarynx. Phillip and Flo’s father died two years before, and for Astrid, all these interactions are like so many crises.
She confronts her son’s teachers for fear they might expel him, a filmmaker friend for his supposed bad casting decisions, her children for being too noisy and proactive. Although the bike’s owner proposes to fix it, she falls into a spiral of reproach and resentment, and finally retreats into herself.
Under the patronage of Ozu’s I Was Born, But… and Bresson’s donkey in Au hasard, Balthazar, Angela Schanelec tackles again in this film the double-edged refuge of family, the desperate will to control one’s life, enduring and fierce loneliness, as well as theatre, through which a group of children performing Shakespeare find themselves crowned. “Handing a crown to someone is a beautiful act, Schanelec says. You make this person independent and strong. Because the king doesn’t need to be told what to do. So, giving the crown to children is even more beautiful.” (M.H.) 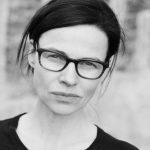