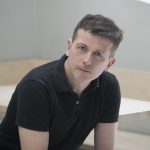 Jorge León studied cinema at the INSAS in Brussels. Early on in his career, his interests revolved mainly around documentary film. His practice intersects with that of many stage artists such as Meg Stuart, Benoît Lachambre, and Simone Aughterlony. It has generated multiple artistic collaborations.
His more recent films, Vous êtes Servis (At your Service) (2010), Before We Go (2014) and Mitra (2018) have been screened at international festivals. They have been awarded with many prizes on a number of occasions.
In 2019 Jorge was the recipient of the Artistic Research Grant (FRART) awarded by the FNRS in Belgium.
Jorge teaches at the Insas and is also a member of the SIC (Sound&Image Culture) arts team. As a guest lecturer, he is often invited to talk about his own arts practice through readings and presentations.