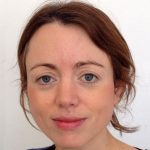 After a Master’s degree in Political Sciences, she supported a Master’s thesis on Hans-Jürgen Syberberg’s film Our Hitler, a film from Germany, at Ecole des Hautes Etudes en Sciences Sociales. She then collaborated with KS Visions for a documentary series, in coproduction with ARTE France, about the political agenda in the Middle East in the early 2000, and she joined Capricci Films in 2010. In 2012, she co-created Baldanders Films with Elisabeth Pawlowski, in Marseille which accompany audiovisual and cinematographic forms approaching experimentation and research with no limit of genre and format. Their films have been selected and awarded in several international film festivals (Cannes Director’s  Fortnight, FIDMarseille, Cinéma du Réel Paris, Clermont-Ferrand International Short Film Festival, Indielisboa…).
In 2015, she creates “Des courts l’après-midi” a non-profit association dedicated to contemporary short-film screenings in Provence and South-East France.