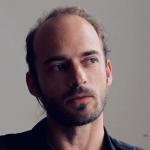 Since his formative days at the INSAS in Brussels, Claude Schmitz has devoted himself to staging for theatre, developing work methods with both professional and amateur actors with a strong emphasis on collective writing. In 2014, while preparing a theatre/film hybrid work entitled Darius, Stan et Gabriel contre le Monde Méchant (Darius, Stan and Gabriel against the Evil World), he took his first steps behind a camera. He came to production with his know-how: writing from what actors are and what their bodies have to say; confronting professional and amateur actors; bringing to cinema the spirit of a troupe; shooting with no script, and starting from a narrative plot. This is how his first film was born, Le Mali (en Afrique) (Mali in Africa), one whose life will last the way the film included in the play did, just the way it was presented as an independent film. Then Rien sauf l’été (Nothing except Summer), an average length film – awarded the Europe Grand Prize at the Brive Festival – screened in 2018 and, finally, Braquer Poitiers – winner of the Jean Vigo Prize – screened in October 2019.