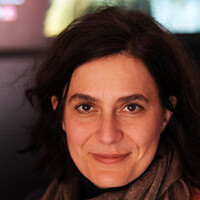 Alessandra Celesia started to work as an actress and a stage director, with keen interest in experimental and collective creation. In 2006, she directed her debut documentary Luntano and Come il bianco, her
her latest film, is selected at this year’s FIDMarseille in the french competition. She is currently working on The mechanics of thing produced by Films de Force Majeure in Marseille, a film shot between China, France and Italy.