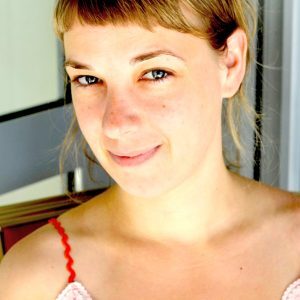 Maria Drandaki founded her own production label Homemade Films in 2009. With a taste for sharp, cutting-edge, innovative cinema, Maria has produced and co-produced several successful short and feature films, which participated and won awards in many international film festivals and were distributed in movie theaters, tv-channels and platforms around the world.  She is a member of the EAVE and ACE producers’ networks.

The sad systematization of Europe that causes asphyxiation and prophesizes poverty. The spectacular future vision of China that indoctrinates crowds of people in the dream and epically surges into the world. Two completely foreign languages compete within one port, whose workers are both their witnesses and prey: in Piraeus. And from there, a journey begins: in their lives, on earth, and in the lives of small, everyday people like them.

A struggling couple embarking on a banal summer holiday switches partners with a female acquaintance and a male stranger. Two parallel love stories emerge in a dream house by the sea that appears to be haunted.

A group of animateurs performs every night on the stage of Hotel Mirage, on the coast of a Greek island. As summer intensifies, the fiesta becomes fiercer, more daring. The nights turn violent, and the pop trance of flamboyance gives way to the rough void of yet another drunken extravaganza. A wild summer story is revealed in the darkness. But when the spotlights are on again, their show must go on.