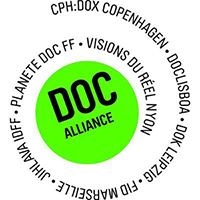 Doc Alliance brings together seven festivals in Europe including :

Its aims at supporting the promotion of European films to the audience: on line, with more then 1000 films streaming
on dafilms.com, and with a selection of films chosen by members of Doc Alliance. These films travel from one festival to the next, and a jury of critics finally awards one of them.

You can watch a special curated program dedicated to FIDMarseille now. Find five awarded films from the 29th edition of FIDMarseille online. Subscribe to stream or download the films.

Two undefined intelligences are intercepting earthly footage of humans living in an area known as the Low Lands. The researchers exchange their findings through a visual feed, in an attempt to...

Ada is nineteen. She accepts to have dinner at the place of a guy that she knows. It all goes really fast; she doesn’t defend herself. Her vagina is torn, her mind di racted. Ada’s story merges...