It was a topsy-turvy kind of war: instead of producing cripples and corpses, it created the most beautiful bodies in the world.
César Aira, The War of the Gyms

Imaginary daughter of zombie Clairvius Narcisse (Bijou Mackenson), Mélissa (Wislanda Louimat) slowly comes out of the shadows in a wedding dress, stops and looks straight at the camera for a long time, to a song by Gerry & the Pacemakers, I’ll Never Walk Alone. This is the closing shot in Zombi Child, separated from the rest of the story by a few intertitles that relate what happened to Narcisse after he found his relatives, and again that then estimate the number of recent cases of zombification in Haiti, thus confirming the reality and continuity of a phenomenon to those who might be tempted to restrict it to the realm of the imagination. This brief epilogue concentrates all the contrasts of the film in a single frame, at once intense, magnificent and dark, that might be called an epitaph, seeing that the whole sequence looks so much like the girl is getting out of a tombstone.

Bertrand Bonello’s taste for contrasts is well known. He obviously enjoys them, and gives them multiple forms, from the recurrent use of split-screens to his anachronistic music choices, from the clear split of spaces between the inside and the outside, to the split of stories and times, and even the increasing hybridity of genres and forms in his work.

The parallel between the two stories in Zombi Child, that of the Haitian zombie Clairvius and that of the French teenage girl Fanny (Louise Labecque), shows the beautiful strangeness of their relationship. Because, not only are the two eras fifty years apart, but time unfolds ever so di erently for them: the zombie who has escaped slave trade has been wandering outside for almost twenty years, while the teenager, in the gilded cage of her prestigious French school, only longs for her lover for a few months, although it seems like an eternity to her.

Through these contrasts, one part ends up possessing the other, even though we can never really tell which one does so. Slave possession, colonial possession, love possession: the various degrees of their consequences reverberate according to a historical construction that is “discontinuous, jolty”, as the unexpected professor at the girls’ school, Patrick Boucheron, encourages us to think. When Mélissa emerges suddenly from darkness, in an old-fashioned wedding dress, at the very last moment of the film, she brings to light all these possessions in one highly- contrasted shot.

This appearance is cut o from the main storyline, but at the same time, it condenses all of it on a single image, both obvious and complex. One may wonder whether this image did not underpin the writing of the whole film. Indeed, Bonello has mentioned in a few interviews how images sometimes come to his mind quite early on in the creative process of a film, and fuel his urge to write – for instance, the tears of sperm that fill the eyes of the prostitute disfigured with a permanent grin in House of Tolerance (L’Apollonide, souvenirs de la maison close). It seems to be the case, anyway, and it calls to mind other images, like the little girl in a bloodstained white nightdress, who makes her way through the darkness in the Paris Opera, and walks towards prima ballerina Marie-Agnès Gillot in Sarah Winchester, Ghost Opera (Sarah Winchester, opéra fantôme, FIDMarseille 2016).

To be precise, that child was a real spirit, the ghost in that “ghost opera” (this is how Bonello often calls his unfinished projects, those, he says, that haven’t thought enough about their own budget). She was little Annie Winchester, who su ered from a degenerative illness that was then called “marasmus”, and whose eventual death plunged her mother into madness. On the advice of psychics, Sarah decided to build a house with several floors and dozens of rooms to accommodate the ghosts of her dead relatives. Bonello told this story simply by superimposing texts over images of the dancer or of a choir rehearsing, slowly letting heterogeneous elements (texts and dances, images and singing, story and performances) vibrate in unison in a kind of trance, brought about by the combined works of the di erent artists he was filming. The result is an apparition straight from the marasmus of creation, considering that the etymology of the word implies the idea of exhaustion.

At the end of The Pornographer (Le Pornographe), the last words of Jacques (Jean- Pierre Léaud), an ageing director who is also busy building the foundations of a house with his own hands, called for a single thing: vigour. “I try, but it is hard. What is there to hope for tomorrow? More physical strength, at least.” We know how tiredness is, as much as beauty, the driving force in Bonello’s films. Just like in the beginning of House of Tolerance, when two prostitutes pass each other in a hallway: one wishes that the party started for good, while the other wonders if it isn’t already over, saying that she is so tired that she wishes she could sleep for a thousand years. Or in Saint-Laurent, when the fashion designer (Gaspard Ulliel) takes a room under Swann in a prestigious hotel, not for business, just to sleep. Or else, in On War (De la guerre), when Bertrand (Mathieu Amalric) is ordered to get some rest, as soon as he is done questing for pleasure the sect from. Bertrand, Tiresia, Jacques, Clairvius… all these stories are incarnated by bodies which are exhausted, deprived of sleep and energy, yet still eager to claim what they feel they are being denied.

Just like Marguerite (Romane Bohringer) in Something Organic (Quelque chose d’organique), from their cloistered world, they could like to intensify pleasure or pain, so that they can still believe in the possibility of living in a time that has condemned the idea of an alternative. How can one arouse that vigour, that momentum that is missing a priori and a fortiori in an enclosed universe, if it is true that the kingdom is fading away because it “only considers its own enjoyment” (On War)? If we were to trace the origin of that pattern, it would probably be in the famous opening scene of On War, when the director played by Matthieu Amalric asks if he can spend the night alone in a funeral parlour as research for a film. At dusk, he takes o his shoes, puts down his cell phone and lays in a co n in the showroom, to see what it feels like to be dead. Willing to trade eternal rest for a little nap, he tries other positions, and the lid suddenly slams shut, burying him for the night.

After the gag comes panic, then petrified silence, dark screen, self-focused breathing… In the morning, when someone sets him free, Bertrand mechanically sits up straight like a Z-movie zombie, at first stunned and then exhilarated by the secret mix of happiness and terror he has just felt, and that he will try to find again in the cult to which Charles (Guillaume Depardieu) invites him soon after. Even though it sparks neither hallucination nor mystical vision – the feeling is made even more real by its bare representation – such extreme sensory deprivation calls to mind William Hurt’s experience in Altered States (Ken Russell, 1980). Both films feature the same idea that trance(s) – from exhilaration or fear – can open alternative realities that our fellow contemporaries are missing. Both films also open – as a writing challenge or an assessment of their day and age – with the most enclosed predicament.

This situation is similar to what Bonello himself experienced himself when he spent several nights in the set of a department store recreated for the shooting of Nocturama, so that he could figure out shots for the following day, or more recently, when he explored the Maisons d’éducation de la Légion d’honneur in Saint-Denis, where half of Zombi Child takes place. Both times he experienced a world without windows where, without points of reference, time itself stops going by. In these tombs, co ns or brothels (in French maisons closes, literally “closed houses”), hotel rooms, apartment bedrooms, manors or department stores, old-world schools or opera houses – like obvious echoes of movie theatres, where we cut ourselves from the world for a while; and also, one imagines, like the apartments where these stories are conceived – the most crucial task is to create time.

To create time: that usually means, to willingly agree to lose control of it. It is what Terranova (Laurent Lucas) asks Tiresia (Clara Chauveaux), whom he holds prisoner at his house, before he runs out, because he doesn’t want to hear her scream or struggle: “I’m o now. Because I’d really like to avoid all these moments when, each time I’ll come into this room, you’ll ask me to let you go. All the times when you’ll scream, because I can’t stand it. And also, all the times when you’ll say that it’s impossible. Because it is possible. Let’s try to save some time, I’ll come back when this time is saved.”

Based on these states of forced sequestration or voluntary confinement, Bonello entrusts art with the di cult mission, at first glance never to be accomplished, to pay close attention to fragility (for instance, when he plays a journalist from Libération at the end of Saint-Laurent, that’s the angle he wants to stress in the fashion designer’s obituary), while being careful not to be entrapped by it, even if it means showing happiness or panic. To make time is actually to make that time of confinement liveable, to find an idea that can last long enough to make a film out of it. Either aging or heading for a fall, Bonello’s characters claim that time that is missing, or stolen by the forced march of their day and age. Even zombies, which are so slow in Tourneur’s film, can’t help running, as one of the teenagers in Zombi Child points out in a blasé tone of voice. Yet, the child that Bonello invents today comes back from battle in a slow, regal walk. 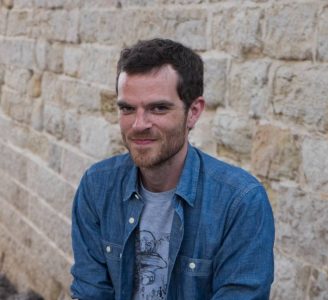