In accordance with the legal decrees relating to the health situation, access to venues with a capacity of more than 1,000 spectators will be conditional on the presentation of a EU Digital COVID Certificate for all spectators aged 11 and over.

This consists of presenting, in digital or paper format, a proof of non-contamination to Covid-19, accompanied by an identity document. Only one of these proofs is required:

– or a PCR or antigen test less than 48 hours old

We invite you to come to the venue from 7pm.

Presentation of the Grand Prix d’honneur of the festival to Apichatpong Weerasethakul in his presence.

A retrospective is undeniably a great opportunity, but always slightly awkward in practice. Making a work accessible – partially, or in full, – for a short period of time, requires either total dedication, or choices to be made. What should be the focus? In which order? To each his own, no choices are unworthy. For Apichatpong Weerasethakul, one may proceed without fear. Firstly, because everything is monumental; few filmmakers have been as inventive and consistent as he. Secondly, because the work has deliberately been developed on several levels, to ensure continuity between each film, repetition and resonance running throughout. They can be viewed or watched again with equal pleasure, chronologically or out of order, just two or three, or all of them, whether the best-known feature films or briefer rarities: you will always discover parts you had missed, entire passages of forgotten dialogue, resonances between even the most distant films, a piece of thread demanding to be pulled, to unravel the skein of work.
Antoine Thirion

Followed by the screening of the opening film

Duende without an arena, in the shadow of the Méjan chapel in Arles, Mano a Mano is neither a duel nor a duo. But an eloquent hand-to-hand encounter with words. The poetry of life versed directly...

Followed by a concert of MADEMOISELLE 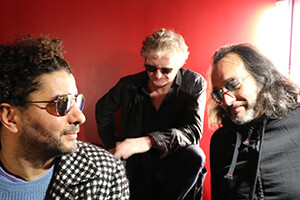 Mademoiselle is the exact definition of a “All Stars Band”: the 3 members are each soloist or leader of different bands. If Sofiane Saidi, Rodolphe Burger and Mehdi Haddab have decided to create this new trio, that’s because their show at La Dynamo de Pantin, which was supposed to be a one time concert, following an invitation of Banlieues Bleues, revealed an intersection of their different musical influences, between blues and rai. The evidence was glaring : for these three there, who of course alredy knew each other, and had played together many times, it was high time to play in trio. An album is planned, a name is found, attention ladies and gentlemen, Mademoiselle is soon out.