Angela Schanelec’s last film to date, Ich war zuhause, aber, premiered at the 2019 Berlin Film Festival, and won the prestigious Silver Bear. But those who have had the privilege of watching the film do not need an award to know that they have been lucky enough to discover a rare, extremely singular and powerful piece of work, which takes the time to weave ever so intricately the issues of loss, love, childhood, transmission, education, animality, daily life, bicycles (!), together with those of creation, cinema and theatre, the nature of speech, silence. In short: a compendium of a film, but progressing with the gravity and lightness of a Bowie song. A masterpiece – let’s not be shy about it – the kind that are few and far between.

This film made us want to share with the audience of the FID part of the film director’s work, which is still too little-known in France. But there were other reasons as well. The original retrospective was organised by Eva Sangiorgi last autumn at the Viennale, the festival that she heads, and seeing the films assembled in such a way made us realise how interesting and stimulating it would be to revisit the work from a different perspective – so it was a critical interest. Following on from this critical endeavour, Marseille-based distributor Schellac appropriately decided to release a DVD box set of some of the films. Besides, Angela Schanelec has visited the FID several times over the years, as a member of the jury first, and then as a spectator, with her students from the Hamburg film school. Not forgetting that in her filmography there is a film shot in Marseille, simply called… Marseille.

The festival will pay tribute to Angela Schanelec in her presence, she will attend the screenings of her films, and take part in a masterclass filmed by the teams of Arte network.

We look forward to making you discover or rediscover a major filmmaker of our time, and we are delighted to welcome Angela Schanelec.

Angela Schanelec studied at the Frankfurt University of Music and Performing Arts, and at the German Film and Television Academy in Berlin. She started as a stage actress, before she became a film director. Her work is based on fragments and ellipses, bright colour patches and crepuscular lights. Her films treat places, whether towns or airports, as characters in their own right. She scrutinises discombobulated individuals, focusing on their moments of silence – which she rarely clarifies – and on what they do to avoid being alone. Either when they move about in a choreographed fashion, like on a theatre stage, or when they collide clumsily, bodies gravitate around no centre in particular, there is no obvious causality in their behaviour. In these films, life is considered only through the misunderstandings, coincidences and contradictions it is made of.

Marie Hermann has been living in Marseille since 2014, and she works there as a publisher, a translator and an interpreter. After working at Wartberg, Diaphanes and Agone publishing houses, she cofounded Hors d’atteinte (literature and essays) in 2018. Among other books, she has published the work of Medhi Charef, Tassadit Imache, Jacques Bouveresse, and an updated version of the American classic Our Bodies, Ourselves. 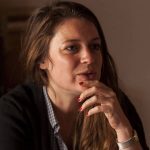